According to the World Health Organization (WHO), non-communicable diseases (NCDs) such as heart disease, cancer and diabetes are now the primary cause of premature deaths worldwide, killing over 36 million people each year. A large percentage of these conditions are self-inflicted, caused by unhealthy lifestyle choices such as drinking, smoking and an unbalanced diet.

The UN health agency revealed that measures to control the spread of NCDs have been inadequate, leading to the pressure put on governments around the world to do more to tackle the global health crisis.

According to Clinic Compare, data for the research was obtained from the World Health Organization, the CIA World Fact-book and the World Lung Association. Each country’s performance was ranked on three factors:

1.Alcohol consumption per person, per year

2.Tobacco consumption per person, per year

3.Obesity prevalence within the population

The ranks for each country were then averaged to determine which population poses the biggest threat to their health through harmful behaviours. 179 countries were ranked in total.

Apparently, Czechs are booze lovers as they are the 5th biggest drinkers in the world consuming a massive 13.7 litres of pure alcohol every year, the equivalent in volume to 550 25ml shots. The country also ranked 11th highest for the number of cigarettes smoked each year, despite having some of the strictest laws on tobacco purchase and consumption in the EU.

Generally, Eastern Europe emerged as the unhealthiest region in the world, with 9 of the 10 top spots on the list occupied by countries in the territory such as Slovakia, Croatia and Poland. Russia ranked in second place while Slovenia came in at a close third, with its residents being the 6th biggest consumers of tobacco products on the planet, smoking a staggering 2,637 cigarettes each year.

The United States was the only non-European country to rank in the top 10 due to it having one of the highest rates of obesity in the world, where 35% of the adult population is classified as being dangerously overweight. Its comparatively low tobacco and alcohol consumption, however, prevented the nation from ranking higher on the list. 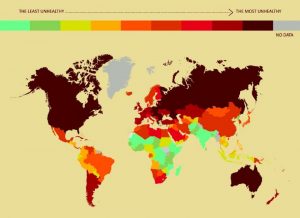